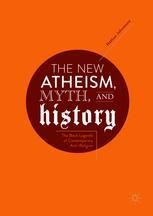 The New Atheism, Myth, and History

The Black Legends of Contemporary Anti-Religion

This book examines the misuse of history in New Atheism and militant anti-religion. It looks at how episodes such as the Witch-hunt, the Inquisition, and the Holocaust are mythologized to present religion as inescapably prone to violence and discrimination, whilst the darker side of atheist history, such as its involvement in Stalinism, is denied. At the same time, another constructed history—that of a perpetual and one-sided conflict between religion and science/rationalism—is commonly used by militant atheists to suggest the innate superiority of the non-religious mind. In a number of detailed case studies, the book traces how these myths have long been overturned by historians, and argues that the New Atheism’s cavalier use of history is indicative of a troubling approach to the humanities in general.  Nathan Johnstone engages directly with the God debate at an academic level and contributes to the emerging study of non-religion as a culture and an identity.

Nathan Johnstone is a specialist in cultural and religious history, and is the author of The Devil and Demonism in Early Modern England. He has taught history at Canterbury Christ Church University and at the University of Portsmouth, UK.

“His book is the first to approach the issue from a historical perspective as opposed to a philosophical or theological perspective. … This book should be required reading for Orthodox priests and indeed anyone who partakes in or follows the debates between atheism and theism, particularly those that involve the New Atheists. It has a unique, almost neutral approach which is a breath of fresh air in these debates.” (Iain Elabo, Orthodoxy in Dialogue, October 14, 2019)
“The New Atheism, Myth, and History intends to overcome this lack of critical reflection on the cultural and historical claims from a predominantly historical perspective. … Nathan Johnstone’sThe New Atheism, Myth, and History. The Black Legends of Contemporary Anti-Religion is a must read for anyone who seriously seeks to engage in the debate concerning the historical and culture impact of religion on the course of history.” (Benedikt Paul Göcke, Reading Religion, readingreligion.org, January, 2019)​
“Johnstone masterfully displays yet another hole in the New Atheist polemic against religion – their selective and distorted use of historical evidence to attack religion.  Johnstone is no apologist for religion, but he amply demonstrates how the New Atheists have created their own mythological version of history, one in which religion is the source of all violence, repression, and irrationality, and in which atheism and rationalism is the hero of freedom, enlightenment, and benevolence.  Whether one is an atheist, agnostic or believer, one ought to read this book for a clearheaded account of religion’s role in notorious historical episodes as the witch hunts, the Inquisition, Nazism, and the Galileo affair.” (Whitley Kaufman, University of Massachusetts, Lowell, USA)