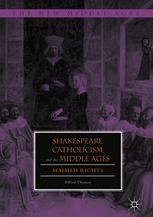 Shakespeare, Catholicism, and the Middle Ages

Whereas traditional scholarship assumed that William Shakespeare used the medieval past as a negative foil to legitimate the present, Shakespeare, Catholicism, and the Middle Ages offers a revisionist perspective, arguing that the playwright valorizes the Middle Ages in order to critique the oppressive nature of the Tudor-Stuart state. In examining Shakespeare’s Richard II, The Merchant of Venice, Hamlet, King Lear, Macbeth, and The Winter’s Tale, the text explores how Shakespeare repossessed the medieval past to articulate political and religious dissent. By comparing these and other plays by Shakespeare’s contemporaries with their medieval analogues, Alfred Thomas argues that Shakespeare was an ecumenical writer concerned with promoting tolerance in a highly intolerant and partisan age.

Alfred Thomas is Professor of English at the University of Illinois at Chicago, USA, and is the author of ten books, including a Blessed Shore: England and Bohemia from Chaucer to Shakespeare (2007); Shakespeare, Dissent, and the Cold War (Palgrave Macmillan 2014); and Reading Women in Late Medieval Europe: Anne of Bohemia and Chaucer’s Female Audience (Palgrave Macmillan 2015).

“This … is a timely book. It is also highly readable and easy to recommend: it is never less than stimulating, its parallels between medieval and later texts often illuminating and thought provoking.” (Ivana Djordjević, Speculum, Vol. 94 (4), October, 2019)

“Alfred Thomas combines an acute sense of the political, probing for tales of tyranny and resistance, with an ability to place literary works in their deep historical context. The lay reader will be intrigued by the parallels he draws between the Elizabethan era and the present.” (Peter Rutland, Professor of Government, Wesleyan University, USA)

“In Shakespeare, Catholicism, and the Middle Ages, Alfred Thomas has written an original, learned, refreshing book on a famous and familiar subject that challenges many of the common critical assumptions about the sources and historical contexts of several of Shakespeare’s greatest plays. With subtlety and brilliance, Thomas not only demonstrates that medieval tradition and culture were well-known and respected by Shakespeare, but that they would also have influenced the distinctive responses of Catholic and Protestant audiences in the late years of the reign of Elizabeth I. Thomas presents his case with an impressive array of evidence in this fascinating study.” (Robert Kiely, Professor of English, Emeritus, Harvard University, USA)