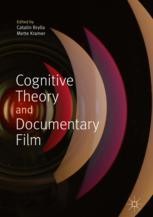 This groundbreaking edited collection is the first major study to explore the intersection between cognitive theory and documentary film studies, focusing on a variety of formats, such as first-person, wildlife, animated and slow TV documentary, as well as docudrama and web videos. Documentaries play an increasingly significant role in informing our cognitive and emotional understanding of today’s mass-mediated society, and this collection seeks to illuminate their production, exhibition, and reception. Taking an interdisciplinary approach, the essays draw on the latest research in film studies, the neurosciences, cultural studies, cognitive psychology, social psychology, and the philosophy of mind. With a foreword by documentary studies pioneer Bill Nichols and contributions from both theorists and practitioners, this volume firmly demonstrates that cognitive theory represents a valuable tool not only for film scholars but also for filmmakers and practice-led researchers.

Catalin Brylla is Senior Lecturer in Film at the University of West London, UK.
Mette Kramer is a lecturer at Copenhagen University, Denmark.

“Cognitive Theory and Documentary Film is a much-needed and comprehensive addition to the literature on documentary filmmaking. … it is well-orchestrated, creative, and an occasion for future thought. Cognitivist analysis should be extended to documentary practices. The directions of research are multiple and prismatic, as this volume amply and convincingly proves.” (Laura T. Di Summa, Projections, Vol. 14 (1), 2020)

“This volume … constitutes the first sustained study of documentary film from a cognitive perspective. … Cognitive Theory and Documentary Film is a fine step towards the realization of a humanities-straddling cognitive paradigm of making meaning.” (Charles Forceville, Leonardo, .leonardo.info, August, 2019)

“The editors of Cognitive Theory and Documentary Film make ambitious claims about the usefulness of cognitive theory for understanding the documentary as well as the fiction film—and their volume more than delivers. Equipped with a fuller picture of the mind as embodied and socially networked, the authors here offer exciting approaches to a wide range of work including biographies, animations, nature films, docudramas and ‘fake news’ websites, while attending as well to the creative processes and aims of documentary filmmakers.” (Cynthia Freeland, Professor of Philosophy, University of Houston, USA)

“Cognitive film research is about narrative fiction, or so it seems. This milestone volume presents the cognitive approach to documentary. Specialists in the field—some of them documentarists themselves—paint a vivid picture of the rich experiences that an exceptionally multifarious genre gives rise to. They document how people watching documentaries construct and engage with other people, their minds, emotions, realities, truths and actions. Moreover they highlight in convincing detail the amazing variety of aesthetics displayed by documentaries supporting viewers’ experiences.” (Ed Tan, Professor of Media Entertainment University of Amsterdam, The Netherlands)

“Represents a welcome first foray into the relation of cognitive theory to documentary film studies.  It not only expands our conceptions of documentary but asks us to consider not only how we see reality through films but how films shape our notions of reality.  The ideas are complex but are made more accessible through the straightforward writing of many of its contributors.” (David MacDougall, Professor of Visual Anthropology , Australian National University, Australia)

“This unique collection is likely to become a landmark in documentary studies. It is ambitious, innovative, sometimes provocative but always rigorous. Its pioneering approach to the complex relationship between selfhood, emotion, subjectivity, cognition and the art of the record is utterly convincing and inherently valuable.” (Anita Biressi, Professor of Media and Society, University of Roehampton, UK)

“Cognitive Theory and Documentary Film is an exceptionally rewarding read. Featuring probing accounts of such timely topics as post-truth, stereotyping, trans-species empathy, and filmmakers’ use of cognitive theory, the volume more than delivers on its ambitious promises. Featuring a formidable team of contributors and evidencing great clarity of purpose, Cognitive Theory and Documentary Film provides conceptual tools, arguments, and examples that deserve attention, within and beyond the academy.” (Mette Hjort, Chair Professor of Humanities and Dean of Arts, Hong Kong Baptist University, Hong Kong)

“This collection of essays, through the emphasis on thought processes, brings an original approach to documentary reception and representation. Even more important, this book will expand the reach and boundaries within the study of cognitive theory itself, which can only benefit from the further influence of documentary production on this field. Thus the reader has a view from both ends of the telescope, and in a truly interdisciplinary fashion, which surely has to be welcomed.” (Jane Chapman, Professor of Communications, Lincoln University, UK)