New Interpretations of Beckett in the Twenty-First Century
Free Preview 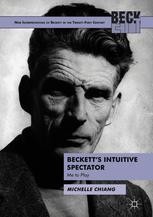 Beckett’s Intuitive Spectator: Me to Play investigates how audience discomfort, instead of a side effect of a Beckett pedagogy, is a key spectatorial experience which arises from an everyman intuition of loss. With reference to selected works by Henri Bergson, Immanuel Kant and Gilles Deleuze, this book charts the processes of how an audience member’s habitual way of understanding could be frustrated by Beckett’s film, radio, stage and television plays. Michelle Chiang explores the ways in which Beckett exploited these mediums to reconstitute an audience response derived from intuition.

Michelle Chiang is Assistant Professor of English at Nanyang Technological University, Singapore. Her research interest is in the intersection between literature and the Philosophy of Time and Mind.

“Michelle Chiang’s superb book is the first serious attempt at making sense of Beckett’s work from the point of view of the spectator. Her rigorous and philosophically informed book enlists Bergson, Deleuze, Merleau-Ponty, but also Brecht and Eisenstein, to demonstrate that Beckett’s work requires ‘ecstatic spectators’ capable of being ‘besides themselves,’ thus receptive facing pathos and negativity, more often than not regenerated by Beckett’s gripping aesthetics of loss.” (Jean-Michel Rabaté, Fellow of the American Academy of Arts and Sciences, and author of Think, Pig! Beckett at the limit of the human)

“Chiang’s work is intelligent, assured, well-informed theoretically, and engages continually with the existing scholarship. By bringing together Beckett's dramatic experiments in four media, and reading them through a lens of the intuition of loss, where durée and habituated time abut each other, this study offers its audience new ways of thinking about these challenging texts.” (Mark Byron, Associate Professor of Modern Literature, University of Sydney, Australia)

“Michelle Chiang makes a compelling case for how Samuel Beckett’s drama both unsettles and intrigues the spectator. Sophisticated and accessible, the book argues that Beckett’s work in each medium of stage, radio, film and television disrupts our habitual, comfortable frames of knowledge and perception, confronting us with an intuitive sense of loss that any spectator can access. Drawing on a range of theorists and philosophers including Kant, Bergson and Deleuze, Chiang’s account is rooted in the phenomenological experience of watching Beckett’s drama in each specific medium, and offers a fascinating account of the intuitive spectator of Beckett’s work.” (Anna McMullan, Professor of Theatre, University of Reading, UK)