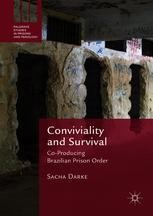 Brazilian authorities continuously fail to comply with international norms on minimal conditions of incarceration. Brazil's prison population has risen ten-fold since the country's return to democracy in the 1980s. Its prisons typically operate at double official capacity and with 100 prisoners for each guard on duty. At the same time, however, the average Brazilian prison is not as disorderly or its staff-inmate relations so conflictual as our established theories on prison life might predict. This monograph explores the means by which Brazilian prisons function in the absence of guards. More specifically, the means by which prison security and inmate discipline is negotiated between prison managers, gangs and the wider inmate body. While fragile and varied, this historical tradition of co-produced governance has for decades kept most prisons in better order and enabled most prisoners to better survive.

Sacha Darke is Lecturer in Criminology at University of Westminster, UK, and Visiting Lecturer at University of São Paulo. Sacha has authored and edited a number of articles, books and special journal editions on Brazilian and Latin American prison ethnographies. He is a founding member of British Convict Criminology.

“I believe this book is an important contribution to prison studies, and should certainly be read by scholars interested in this subject, as well as by the general public.” (Bárbara Barraza Uribe, Criminal Law and Criminal Justice, March, 2020)

“In 1922, the anthropologist Bronislaw Malinowski stressed the value of the methodological sincerity of authors. Almost a century later, the distinction between what was seen by the researcher, what has been reported to him, what is the researcher's interpretation, and what is the interpretation of those he studies – whose explicitation Malinowski defines as methodic sincerity - is still rare. I have no doubt that Conviviality and Survival, where Sacha Darke analyses with extreme sensitivity and sagacity the specificities of the Brazilian prison system, is one of these rare works.” (Karina Biondi, Associate Professor, State University of Maranhão, Brazil)