Christianities in the Trans-Atlantic World 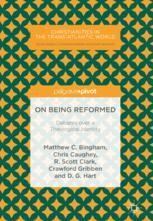 Debates over a Theological Identity

This book provides a focus for future discussion in one of the most important debates within historical theology within the protestant tradition - the debate about the definition of a category of analysis that operates over five centuries of religious faith and practice and in a globalising religion. In March 2009, TIME magazine listed ‘the new Calvinism’ as being among the ‘ten ideas shaping the world.’ In response to this revitalisation of reformation thought, R. Scott Clark and D. G. Hart have proposed a definition of ‘Reformed’ that excludes many of the theologians who have done most to promote this driver of global religious change. In this book, the Clark-Hart proposal becomes the focus of a debate. Matthew Bingham, Chris Caughey, and Crawford Gribben suggest a broader and (they argue) more historically responsible definition for ‘Reformed,’ as Hart and Scott respond to their arguments.

“This book is a helpful introduction for any who are interested in the potential historical and theological implications of identifying as ‘Reformed.’ And for the readership of this journal, it may be of special inter­est for those who consider themselves to be ‘Reformed Baptists.’” (Jonathan N. Cleland, The Journal of Andrew Fuller Studies (JAFS), Issue 2, February, 2021)
“This is an important book. It needs to find its way into seminaries and libraries, but also into the hands of any who are wrestling with the question of theological identity in the current shifting landscape. It deserves to be read and pondered by all who are convinced of the importance of an historically-grounded confessional identity for Reformed Christianity, and by those who are not.” (Jeremy Walker, The Banner of Truth, July, 2019)
“How does one identify a tradition, religious or political, and map its continuity from the past into the present? The authors show that issues of principle quickly arise between people who bind themselves to different ideas of sameness and difference.  Learned and lively, their debate is instructive even if the outcome is inconclusive.” (Paul Helm, Professor of the History and Philosophy of Religion Emeritus, King’s College London, UK)

“On Being Reformed marshals the exceptional historical and ecclesiastical expertise of its various contributors to address the much debated identity of the Reformed tradition. Informed in their use of sources, forthright in their arguments, and irenic in tone, these essays will serve readers well by helping them discern where the fault lines between Baptist and Reformed churches truly lie and also where the bonds of unity in faith and practice may be found. Both are necessary services for those of us who inhabit a living Reformed tradition and wish to see it flourish in days ahead.” (Scott R. Swain, James Woodrow Hassell Professor of Systematic Theology, Reformed Theological Seminary, USA)