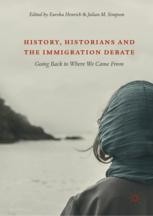 History, Historians and the Immigration Debate

Going Back to Where We Came From

This book is a response to the binary thinking and misuse of history that characterize contemporary immigration debates. Subverting the traditional injunction directed at migrants to ‘go back to where they came from’, it highlights the importance of the past to contemporary discussions around migration. It argues that historians have a significant contribution to make in this respect and shows how this can be done with chapters from scholars in, Asia, Europe, Australasia and North America. Through their work on global, transnational and national histories of migration, an alternative view emerges – one that complicates our understanding of 21st-century migration and reasserts movement as a central dimension of the human condition. History, Historians and the Immigration Debate makes the case for historians to assert themselves more confidently as expert commentators, offering a reflection on how we write migration history today and the forms it might take in the future.

Eureka Henrich is a Research Fellow in Conflict, Memory and Legacy at the University of Hertfordshire, UK, and an Honorary Associate of the Menzies Centre for Australian Studies, King’s College London, UK. Her work explores histories of migration, health, heritage and memory in Australian and transnational contexts.

Julian M. Simpson is an independent writer and researcher based in the North of England. He has published widely on the history of migration, the history of healthcare and the relevance of history to policy. He is the author of Migrant Architects of the NHS: South Asian doctors and the reinvention of British general practice (2018).

“This wide-ranging volume shows how vital it is to contextualise contemporary debates about migration through an historical lens. The research shared within these diverse chapters informs our work presenting migration heritage to the public.” (Sophie Henderson, Director of the Migration Museum Project, UK)

“This important collection asks academics to urgently address the major questions of our time, using history as a “martial art” in which to fight the social and political battles inherent in immigration debates.” (Jayne Persian, Lecturer in History, University of Southern Queensland, Australia, and Author of Beautiful Balts: From displaced persons to new Australians (2017))

“This timely and provocative collection of essays illustrates how historians are uniquely placed to contribute in a meaningful and informed way to the polarizing debate over immigration and migration.  Migrant peoples, as this book demonstrates, are far from anomalous or marginal; rather, they have long enriched and formed an essential part of the creative dynamic in their adopted communities.” (David Wright, Professor of History, McGill University, Montreal, Canada, and co-editor of Doctors Beyond Borders: The Transnational Migration of Physicians in the Twentieth Century (2016))

“This is an impressive contribution to global history. Eureka Henrich and Julian M. Simpson have brought together a strong cast of established scholars and new researchers who make a well-argued case that historians have much to offer current debates on migration. The book has been carefully crafted to enhance its accessibility to the non-specialist who has so much to learn from its findings.” (John Tosh, Professor of History, Roehampton University, UK, and Author of Why History Matters (2008))

Book Title
History, Historians and the Immigration Debate
Book Subtitle
Going Back to Where We Came From
Editors
Copyright
2019
Publisher
Palgrave Macmillan
Copyright Holder
The Editor(s) (if applicable) and The Author(s)