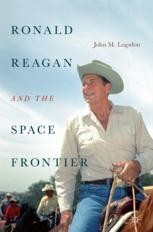 Ronald Reagan and the Space Frontier

When Ronald Reagan was elected in 1980, limits on NASA funding and the lack of direction under the Nixon and Carter administrations had left the U.S. space program at a crossroads. In contrast to his predecessors, Reagan saw outer space as humanity’s final frontier and as an opportunity for global leadership. His optimism and belief in American exceptionalism guided a decade of U.S. activities in space, including bringing the space shuttle into operation, dealing with the 1986 Challenger accident and its aftermath, committing to a permanently crewed space station, encouraging private sector space efforts, and fostering international space partnerships with both U.S. allies and with the Soviet Union. Drawing from a trove of declassified primary source materials and oral history interviews, John M. Logsdon provides the first comprehensive account of Reagan’s civilian and commercial space policies during his eight years in the White House. Even as a fiscal conservative who was hesitant to increase NASA’s budget, Reagan’s enthusiasm for the space program made him perhaps the most pro-space president in American history.

John M. Logsdon is a world-renowned historian and analyst of space issues. He is the author of John F. Kennedy and the Race to the Moon (Palgrave, 2010) and After Apollo? Richard Nixon and the American Space Program (Palgrave, 2015), both of which are award-winning, definitive accounts of presidential space policy. He is Professor Emeritus at The George Washington University’s Elliott School of International Affairs and founder of its Space Policy Institute.

“John Logsdon’s Ronald Reagan and the Space Frontier is a foundational work that should be consulted by anyone who wishes to delve deeply into NASA history and civil space policy in the 1980s. … it will be an essential work for professional historians and political scientists interested in late 20th-century presidential space decision-making.” (Michael J. Neufeld, Quest, Vol. 27 (1), 2020)
“This volume is a tutorial on the leadership and legacy of Reagan’s space interests, details that should be instructive to all those in the space community eager to fathom today’s presidential pronouncements about  America’s space agenda.this new book from Logsdon adds to the author’s legacy of space policy observations.” (Leonard David, Leonard David's Inside Outer Space, leonarddavid.com, May 29, 2019)
“Once again, John Logsdon puts us ‘in the room where it happens’ as the decisions are made that will lead to today’s International Space Station and burgeoning commercial space sector. No one is better at transforming meticulous research and complex history into an engaging and highly-readable tale. A must-read for anyone interested in space history or presidential decision-making.” (Kathy Sullivan, NASA astronaut, retired, and Ambassador-at-Large, Smithsonian National Air and Space Museum)
“Without question, Professor Logsdon is the preeminent historian of the U.S. space program.  This book is unique in providing a thorough and insightful analysis of the decision-making process used to resolve the major space-related issues during the presidency of Ronald Reagan, a period of time that witnessed more space policy than any other in our history.  It represents a critical foundation that will benefit students, public servants, and industry executives for many years to come and is a must-read for any space enthusiast.” (Gilbert Rye, former director of space programs, National Security Council)
“Ronald Reagan had greater influence over NASA’s space activities than any president not named John F. Kennedy. During his presidency the space shuttle began flying, the space station gained approval, and space commercialization entered a new era. John Logsdon has told this story with verve and style. His depth of knowledge is unparalleled, his breadth of analysis is incomparable, and his presentation is unrivaled in this superb account.” (Roger D. Launius, former NASA chief historian and author of The Smithsonian History of Space Exploration)