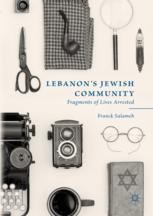 This book mines the early history of modern Lebanon, focusing on the country’s Jewish community and examining inter-Lebanese relations. It gives voice to personal testimonies, family archives, private papers, recollections of expatriate and resident Lebanese Jewish communities, as well as rarely tapped archival sources. With unique access to the Jewish communities in Lebanon and the Greater Middle East, the author presents both history and memory of Lebanon’s Jews, considering what, how, and why they choose to remember their Lebanese lives. The work retells the history of Lebanon by placing Lebanese Jews into the country’s narrative from the 1920s to 1970s, including an examination of the role they played in the construction of Lebanon’s multi-sectarian system.

Franck Salameh is Associate Professor of Near Eastern Studies in the Department of Slavic and Eastern Languages and Literatures at Boston College, USA.

“Salameh’s writing is accessible and informative … . Bringing together studies like Salameh’s with the now wealth of studies on Jews in distinct Middle Eastern countries, using a comparative approach, may greatly enrich our understanding of this important topic.” (Caroline Kahlenberg, Bustan: The Middle East Book Review, Vol. 10 (2), 2019)

“Franck Salameh’s work on Lebanese Jewry is an important contribution to the literature on the tragic and forgotten fate of the Jewish communities expelled from Arab lands after the creation of the State of Israel. His unique study combines meticulous historical research and personal testimonies, offering new insights into the lives of a small minority in cosmopolitan, multi-ethnic and multi-cultural Lebanon before 1975. Highly recommended for both academic and general readers who are interested in the old Lebanon.” (Meir Zamir, Ben-Gurion University of the Negev, Israel, and Author of The Formation of Modern Lebanon and Lebanon’s Quest)

“A deeply researched, solid piece of scholarship, in an area that very few dare explore; history that reads like a thriller.” (Nassim Nicholas Taleb, New York University, USA, and Author of The Black Swan, Antifragile, and Skin in the Game)

“Franck Salameh has artfully woven the story of the Jewish community in Lebanon, and in effect the story of Lebanon and its Jews. This is a grand narrative—a deep and moving story—of a very small community in a very small country on the margins of the Mediterranean basin. In his book, which combines historical research and personal testimonies, with a staunch moral position regarding what had happened to the Jews of Lebanon, Salameh turns what appears to be a story whose tragic end is known in advance into a story of renewed love for an old homeland still troubled by the question of her relation to those who were once her children. The book makes it clear both that the Jews who left Lebanon never completely disengaged from it and that their story cannot be disengaged from the course of Lebanon’s history. This is a highly recommended book, a must read for whoever wishes to know more about an important chapter in Lebanon’s history and the history of the Jews in the Middle East.” (Eyal Zisser, Tel Aviv University, Israel, and Author of Lebanon; The Challenge of Independence, and Commanding Syria)

“At the turn of the last century Lebanon was a mosaic of religions, sects, and cultures, with prominently among them a vibrant Jewish community. Indeed, many Lebanese and foreign Jews once flocked to that Lebanon’s universities in pursuit of higher learning. Among those were, ironically, a handful of Americans denied admission into medical schools in the United States, simply because they were Jewish. Lebanon was different, and Franck Salameh’s probing, thoroughly researched, and articulate book speaks of that era, radiating vibes of an academic bildungsroman, a fastidious historian’s quest delving into, retrieving, and revivifying the story of a community that had once formed an integral part of the Lebanese mosaic. This is a book that reconstructs bridges that were once wrongfully felled; a long overdue contribution that sheds light onto one of the many taboo topics that still haunt Lebanese society.” (Mahmoud Rasmi, American University of Beirut, Lebanon)

“A fascinating and deeply moving book, recalling the precious Lebanese dream of the early twentieth century: making Lebanon a free democracy, a refuge for the persecuted. A story of a yet still hopeful time, when Lebanese Christians stood by Lebanese Jews, when mutual respect and admiration united the two peoples of the Bible. A time when audacious righteous dreams were still being dreamt, whereby next to a free Lebanon there would be a free Israel; two lands of refuge for two ancient Near Eastern peoples unmolested, emancipated former victims of Jihad and Dhimmitude.” (Bat Ye’or, Author of The Dhimmi and The Decline of Eastern Christianity)
Show all