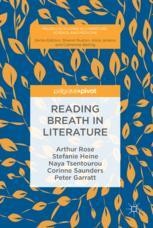 This open access book presents five different approaches to reading breath in literature, in response to texts from a range of historical, geographical and cultural environments. Breath, for all its ubiquity in literary texts, has received little attention as a transhistorical literary device. Drawing together scholars of Medieval Romance, Early Modern Drama, Fin de Siècle Aesthetics, American Poetics and the Postcolonial Novel, this book offers the first transhistorical study of breath in literature. At the same time, it shows how the study of breath in literature can contribute to recent developments in the Medical Humanities.

Arthur Rose is Postdoctoral Research Fellow in English Studies at Durham University, UK, where he is an affiliate of the Wellcome Trust Funded Life of Breath Project. Previous publications include Literary Cynics: Borges, Beckett, Coetzee (2017) and, with Michael J. Kelly, Theories of History: History Read across the Humanities (2018)

Stefanie Heine is a Postdoctoral Fellow (SNF Postdoc.Mobility) at the Centre for Comparative Literature at the University of Toronto, Canada. She is the author of Visible Words and Chromatic Pulse. Virginia Woolf’s Writing, Impressionist Painting, Maurice Blanchot’s Image (2014).

Naya Tsentourou is Lecturer in Early Modern Literature at the University of Exeter, Penryn. She is the author of Milton and the Early Modern Culture of Devotion: Bodies at Prayer (2017) and has co-edited, with Lucia Nigri, Forms of Hypocrisy in Early Modern England (2017).

Corinne Saunders is Professor of Medieval Literature and Co-Director of the Institute of Medical Humanities, Durham University.  Her publications include Magic and the Supernatural in Medieval English Romance (2010) and (co-edited with Carolyne Larrington and Frank Brandsma) Emotions in Medieval Arthurian Literature: Body, Mind, Voice (2015).

Peter Garratt is Associate Professor in the Department of English Studies at Durham University.  His publications include Victorian Empiricism (2010) and The Cognitive Humanities: Embodied Mind in Literature and Culture (2016). A forthcoming volume, Distributed Cognition from Victorian Culture to Modernism, co-edited with Miranda Anderson and Mark Sprevak, will be published in late 2018.