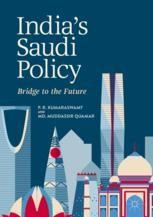 Bridge to the Future

The book traces India’s Saudi Policy and locates the current state of bilateral relations and the challenges it faces. It argues that during the Cold War the relations were largely shaped by the Pakistan factor which in turn inhibited both sides from exploring the importance and value of one another. As a result, the relations were largely transactional and marginal. The end of the Cold War coincided with two interesting developments, namely, significant growth in India’s economic power and influence and the de-hyphenation of Pakistan from its Middle East policy. This resulted in greater political engagements between India and Saudi Arabia and was strengthened by the growing energy trade ties. For long expatiate population and haj have been the backbone of the relations, and they have been new instruments as India looks to enhance its engagements with the Kingdom through investments opportunities, political contacts, shared security concerns and strategic cooperation. India’s Saudi policy, however, face many challenges most importantly the regional instability, the Iran factor, low oil price and the international dynamics. The book will be the first comprehensive work on the India-Saudi relations. Though targeting a wider audience, it will be academically grounded and based on primary sources collected from India and Saudi Arabia.

P.R. Kumaraswamy is a professor of contemporary Middle East studies in Jawaharlal Nehru University (JNU), New Delhi, India. From 1992-1999, he was a research fellow at the Harry S., Truman Research Institute for the Advancement of Peace, Jerusalem. Since joining JNU in September 1999, he has been researching, teaching, and writing on various aspects of the contemporary Middle East. His works include Squaring the Circle: Mahatma Gandhi and the Jewish National Home; India’s Israel Policy; and Historical Dictionary of the Arab Israeli Conflict. Prof. Kumaraswamy has edited a number of volumes and published research articles in a number of refereed and non-refereed international journals and regularly contributes to Indian as well as international media outlets. In February 2010, he set up the virtual Middle East Institute, New Delhi and serves as its honorary director. He is the editor of Contemporary Review of the Middle Eastand the series editor of Persian Gulf: India’s Relations with the Region.

Md. Muddassir Quamar is Associate Fellow in the Institute for Defence Studies & Analyses, New Delhi, India. He holds a Ph.D. in Middle East studies from Jawaharlal Nehru University (JNU), India. His doctoral thesis examined social developments in Saudi Arabia between 1991 and 2010 within a conceptual framework of Islamic modernism. Dr. Quamar’s areas of interest include Politics and Societies in the Gulf, Middle East Strategic Affairs, and Political Islam. His research papers have appeared in leading international journals such as Contemporary Arab Affairs, Digest of Middle East Studies, Journal of Arabian Studies and Journal of South Asian and Middle Eastern Studies. He has co-edited an anthology titled Contemporary Persian Gulf: Essays in Honour of Gulshan Dietl, Prakash C. Jain and Girijesh Pant, contributed chapters to edited volumes and regularly contributes opinion articles on strategic developments in Middle East and India-Gulf relations. Dr. Quamar has been a visiting fellow in King Faisal Center for Research and Islamic Studies, Riyadh and serves as Associate Editor of Contemporary Review of the Middle East.
Show all