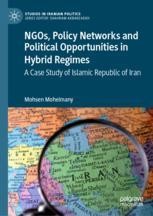 A Case Study of Islamic Republic of Iran

This book discusses the diversity and resilience in a hybrid regime where civil society organisations are either provided with complex sets of opportunities or face severe constraints. By studying the case of Iran between 1997 and 2013, it shows how the Islamic Republic regime went into two opposite directions under two presidencies and played in-between supporting and suppressing advocacy NGOs. After accommodating a novel theoretical framework enabling scholars to identify the contributing factors of diversity in the regime, four case-study chapters are designated for comparing the women’s rights and environmental NGOs across local and national governments. These two political and technical policy areas demonstrate the different scopes of freedoms for advocacy NGOs. The contrasting narratives of the civil activists and policymakers imply paradoxes and shifts in the arrangement of opportunities for action and advocacy, although the leadership and structure of the regime remained unchanged during the period of study.

Mohsen Moheimany holds a PhD in political science from Dublin City University. He received his MA of public policy from The University of Nottingham. Mohsen’s area of interest is mostly Iran’s civil society, with the experience of writing for local and international publications and media. Previously, Mohsen published a book chapter with Routledge publication about the changing civil society and the hybrid regime in Iran.

"This brilliant book is a unique combination of comparative politics, area studies, and a personal commitment to open politics.  It shows that Iran is a collection of interlinked sub-polities, in which political opportunities for NGOs vary substantially and relatively predictably.  The book, and its theoretical framework, should be interesting to students of Iranian politics, authoritarian politics, and civil society."

"Mohsen Moheimany's book is an empirically grounded and theoretical sophisticated study of the political trajectories Iran has experienced over the course of the last two decades and how they influenced the real of civil society. The back and forth between reformism and conservatism demonstrates clearly how policies are shaped in Iran, highlighting the complexity of social and political relations in the Islamic Republic. This study is a brilliant effort to shine the light on policy-making in an authoritarian context."

"Moheimany's book is a thoughtful and welcome contribution to the literature in the field. By addressing political variations across a wide spectrum he helps to advance our understanding of the relationships that emerge between NGOs and the state in authoritarian settings. Specifically, his work underscores and further reveals the complexity of civil society advocacy and activism in the Iranian context. "

"This is a well-written book on an important question in an exceptionally interesting country. Mohsen Moheimany uses the case of Iran to test broad public policy theories on the opportunities and constraints for political actors in the process of public policy making. It tests theories on policy areas and government levels that have been developed for western, democratic countries on an undemocratic regime, which speaks to their universality and limitations. We also learn something new and interesting about Iran, and specifically the formal role of NGOs in the Islamic Republic."

"Drawing on significant original research in the field, including interviews with activists, on a scale not usually seen in studies of civil society the Middle East, Moheimany's book presents a nuanced and convincing analysis of civic mobilization in Iran which will be of interest to scholars and practitioners alike."