Maria Tamboukou on the Adventure of Women Workers’ Education

How many of us know that when it was first established in 1910 in Copenhagen by Clara Zetkin it was hailed as the International Women Workers’ day? ‘Just as the worker is subjugated by the capitalist, so woman is subjugated by man and she will remain subjugated as long as she is not economically independent; work is the indispensable condition for economic independence’, Zetkin powerfully pointed out at the time. Indeed women workers were at the forefront of what we now recognize as the first wave feminism. As a matter of fact the rallying cry of the first autonomous feminist movement was the right to work and not the right to vote, as it is commonly perceived. What is also a grey area in our understanding and knowledge of the feminist movement in the Western world is the role of women workers’ education not only in mobilizing and sustaining women’s struggles against exploitation, but also in making a radical intervention in the cultural formations of modernity.

I wrote about these hidden and forgotten histories in my recently published book, Women Workers’ Education, Life Narratives and Politics which emerged after 7 years of intensive archival research in Paris and New York, the two major centres of the global garment industry in the first half of the 20th century. Women workers’ presence was catalytic in the multiple trends of the international movement for workers’ education: they took up and moved around a wide range of subject potions as students, teachers, labour organizers, activists and creators. For the majority of them the idea of having an education was an effect of their involvement in the wider political and social movements of the nineteenth and twentieth centuries.

As labour organisers women workers had to fight hard against a number of adversaries: sexism in their union, as well as the marginalization of workers’ education in the overall priorities of the labour movement were amongst the greatest difficulties they had to overcome. Their role as educators was thus complex and multi-faceted. First they had to fight for resources and persuade their suspicious male comrades that spending money for workers’ education was not a luxury, but a necessity. Once they had secured a meagre and precarious budget, they had to find, rent and maintain buildings and put in place other material infrastructure for educational programmes to become possible. They would further design educational programmes and curricula, search for suitable labour tutors and persuade famous professors to give lectures. Last, but not least they had to recruit students for their programmes, something that was far from easy or straightforward given the many pressures looming upon workers’ lives, particularly during periods of prolonged unemployment as in the time of the Depression.

Women workers’ intellectual and cultural life was rich and diverse on both sides of the Atlantic. Not only were they avid readers, theatre goers and art fans, but they actively participated in the cultural production of their times and geographies. It was their formal and informal education that created conditions of possibility for such intellectual pursuits and it was through different channels that they unfolded their creative forces. Their literary and dramatic work has made forceful connections between ethics, aesthetics and politics, but it was also differently shaped by the intellectual and cultural trends and movements of their specific national and socio-economic contexts. Here again it was the autonomous feminist movements that sprang in the second half of the nineteenth century that created conditions of possibility for the figure of the woman worker/writer to emerge, very conscious of her uniqueness in the cultural histories of her time. Imagination played a crucial role then not only in winging working women’s pen, but also in opening up vistas of another world that was possible.

What I have highlighted in my book is the women workers’ autobiographical narratives trace lines of flight and recount events of ‘becoming other’. But as I have also pointed out, women workers often found themselves entrapped in the black holes of patriarchy not only in the context of capitalist exploitation but also and perhaps more poignantly in the context of the male driven trade unions and even amongst their sister comrades. In my analysis however, ‘the end’ is never important; what is always more interesting and fascinating is the experience of being in the middle, take risks, be bold and dare to learn.

Maria Tamboukou is Professor of Feminist Studies at the University of East London, UK. She has held visiting research positions in a number of institutions and is currently Affiliated Professor in Gender Studies at Linnaeus University Sweden and Adjunct Professor at the Institute for Educational Research at Griffith University, Australia. Writing feminist genealogies is the central focus of her work, comprising 12 books and more than 70 articles and chapters. 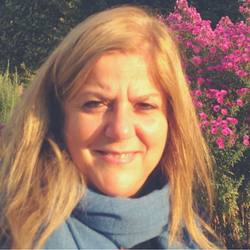