Thwaites and Pressland on Being Bold for Change in Academia

Rachel Thwaites and Amy Pressland, editors of Being an Early Career Feminist Academic, discuss how feminist academics can continue to challenge, empower, and change institutions from within

On International Women’s Day it seems right to take a moment to consider the struggles of gendered inequality that continue to exist, as well as to celebrate the successes and achievements that have been made towards equality in many areas. As academics and researchers we wanted to showcase the work, the activism, the problems, tensions, joys, and collective resistance strategies of early career feminist academics in a changing academy. Therefore we decided to take an explicit look at the early career stage in academia, and the particular impacts having a feminist identity has, when starting out in a marketising, neoliberal higher education sector.

In Being an Early Career Feminist Academic: Global Perspectives, Experiences, and Challenges, we asked contributors to provide research and personal narratives on this moment in the career, taking up the story of what a neoliberal agenda can do to experience of work, understandings of the place of higher education in society, and personal identities. Our contributors, coming from a range of Western countries, spoke of precarious, insecure work, jobs patched together to make a living, mobility, audit culture, hierarchies of knowledge – with gender and feminist work often undervalued – expanding definitions of work, teaching feminism, teaching to disrupt, English as capital, cross-cultural identities, the importance of networks, motherhood, struggles with defining oneself as feminist, anger, collective resistance, self-care, and even provided a Manifesta for change. The book makes a clear call for change in academia and for solidarity across career stages.

A major theme that cut across many of the chapters was precarious work. With short-term and zero-hours contracts becoming normalised at the early career stage, being insecure and lacking worker rights, while performing demanding, responsible, and often similar work to full-time, secure members of staff is unremarkable. The exploitation that much of higher education teaching (in particular) relies upon is just part of the necessary experience needed to maybe, just maybe, get that secure, permanent position in future. Career trajectories are interrupted, contacts need to be made anew, and the processes of institutions navigated and worked out once again. This lack of security was exhausting, and drove many early career academics to reconsider their profession entirely, as one of our contributors, Lara McKenzie found in her research (pp. 37-38):

"KATIE: The money is a big thing… I’d like to be able to move out of share[d] housing. I’d like to be able to afford to have children before I’m seventy, buy a house… At the moment, there’s days when I’m like “No, f- all this… I’m not enjoying any of it, I’m not contributing anything, and I’m not making a living wage. Why am I bothering?”… And knowing the best I could hope for at this stage is that I might get a two-year postdoc. somewhere, and then I’ll have to apply for another two-year postdoc. somewhere, and then maybe by the time I’m 40 I will get some kind of permanent position. I just don’t think that’s really what I want to do at this point."

The impacts on personal life are significant and important not to overlook or trivialise. Agnes Bosanquet talks of her struggles to care for her daughter while managing the demands of academia, which remains detached from the realities of familial and embodied struggles. After nearly dying in a long and difficult labour her academic colleagues were still focused on work: ‘One of our first visitors in hospital was a colleague who congratulated me on publishing two papers that week’ (p. 78).

As many of our contributors noted, including Murray, Crowley and Wånggren, self-care should be considered an important part of our everyday work: ‘Being a feminist is hard work. It is exhausting to constantly find one’s person and beliefs at odds with the structures and organization of the social world’ (p. 215). An expanded definition of work is needed, that take emotional labour, work to maintain connections, and care work into account. Self-care is also important; our contributors argue strongly that self-care is feminist action.

This call to action was reiterated in various forms by our contributors, but with the same underlying demand. Collective resistance is needed to find new ways forward and to challenge the marketised logic of higher education. Working together can be a radical action when a model of working calls for isolation and competition. In this way feminist academics can continue to challenge, empower, and change from within.

Rachel Thwaites is Lecturer in Sociology at the University of Lincoln, UK. She has interests in gender, identities, higher education, health and illness, emotion work, naming, and qualitative methods.
Amy Pressland is International HR Projects Manager for DB Cargo UK working on an international research project called ‘Women in Management’. Previously she was Lecturer in Education at the University of East Anglia, UK and has published articles and book chapters on mixed-sex sport in HE, European media representations of gender at major sporting events, the surveillance of sportswomen's bodies in British newspapers, and the media coverage of women's boxing. 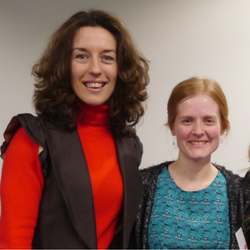