Human rights are strong political currency for the globalised world in which we live. Yet, this powerful language and instrument for empowerment and social change can often show its limitations, particularly when seen through the lenses of multifarious power relations emerging at the local, regional and global level. In this context, the increasing legitimisation and inclusion of issues relating to sexual orientation and gender identity in the international human rights arena from the 1990s, has opened the space for questioning of the fundamentally heteronormative matrix of society.

At the same time, these developments have also created the opportunity of radically re-thinking the gender binary and the impact that this may have on both society and individual lives. In most cases, however, human rights discourses on issues relating to sexual orientation and gender identity at both the regional (take the case of the Council of Europe), or at the different domestic levels have, so far, focussed on a grand strategy of assimilation and taming of sexual and gender difference. What mainstream human rights strategies have neglected (or failed to do) has been challenging given institutions (the state, the family, the school, politics) which are conducive of the reproduction of these constraining frameworks of expression of individual experiences and constellations of sexual and emotional desires, as well as configurations of gender identity and gender expressions. Such a problem, commonly framed by queer (legal) theorists and scholars poses a fundamental challenge to human rights as a discipline: can we embrace fluidity and call for a system of human rights that is both adaptive to individual needs and experiences as well as comprehensive in its contemplation of possible human rights issues connected to sex, sexuality and gender?

In “European Sexual Citizenship: Human Rights, Bodies and Identities” I seek to provide some reflections on this challenging question that forces us to confront ourselves not only with the concept of “human rights” but also with our own conception of what a “citizen” is. This is because claiming one’s human rights without resorting to political action, following Hannah Arendt, may amount to a passive request to be made passive objects of human rights protection, rather than active subjects of international human rights law. Such shift from (political) inactivity to activity can only be conceptualised, however, if we introduce the concept of citizenship into our analysis.

In this regard, therefore, I have looked at the case law of the European Court of Human Rights relating to issues of sexual orientation and gender identity from a critical standpoint. In particular, in the book, I have tried to trace the genealogy of contemporary sexual citizenship beyond the framework of liberal assimilation and normalisation of LGBTI and queer identities. This endeavour is based on an understanding of citizenship as an elective practice, rather than the mere possession of a given passport that opens up the opportunity of talking about “multi-sexual” and “multi-gender” sexual citizenship, that is to say forms of citizenship that are, simultaneously, multi-scalar and multi-directional. In particular, “multi-sexual” and “multi-gendered” conceptions of citizenship allow the accommodation of non-linear configurations of sexuality and gender that escape the matrix of both heteronormativity and gender binarism within the domain of human rights. Ultimately, this framework of analysis calls for an approach to human rights that is more “bottom-up” than “top-down”, insofar as it attempts to mould the codification, guarantee and protection of human rights principles after the concrete needs of the individual, rather than after a stylised and abstract universal subject of human rights.

In light of the celebration for the LGBT History Month, reflecting on the trajectory, future and challenges of new forms of sexual citizenship enables an analysis that goes beyond the mere recognition of rights following the traditional liberal framework. Rather, it allows the inclusion of intersectional approaches to social, sexual and gender justice, as well as opening up useful conversations about the rights of those who are simultaneously excluded from the citizenry and embody forms of sexual or gender resistance.

Francesca Romana Ammaturo is Lecturer in Sociology and Human Rights at the University of Roehampton, UK. Her research focuses on the rights of lesbian, gay, bisexual, trans and intersex people in Europe. 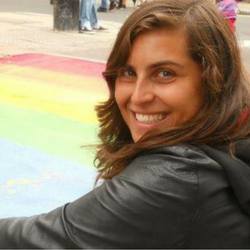