In this article Gabrielle Owen discusses the treatment and recognition of trans students in education under the Trump administration.

On February 22, 2017, the Trump administration withdrew guidance offered under the Obama administration clarifying how Title IX, the Education Act of 1972 barring gender discrimination, encompasses protections for transgender students. One of the issues addressed in the guidelines and presently at stake in U.S. schools and colleges is the right for transgender students to use the bathrooms that best reflect their gender identity. Though Trump’s letter cannot undo the law as it is stated in Title IX, the letter does send the message that the administration will not prosecute these types of discriminatory violations and it uses Segregation Era wording to emphasize “the primary role of the States” in decisions about bathroom access.

Debates and legislation about bathroom access fundamentally misunderstand or simply deny what it means to be trans or genderqueer. Such debates assume that there is some objective measure of biological sex that can and should determine which bathroom a person “ought” to use. But the reality for most trans and genderqueer youth and adults is not so simple. Both gender and biological sex are much more variable and fluid than these arguments presuppose. Women’s rooms are already sites of intense gender policing in which those who present as masculine or androgynous might be subject to stares, comments, or more confrontational encounters in which security is called or a person is forced to leave the restroom. What is a person supposed to do? In these circumstances, how does one “prove” that they belong there? Legislating bathroom access is absurdly unenforceable, exposing that these debates are not really about who is allowed to use the bathroom. They are about who is allowed to exist at all. The idea of stable, binary gender is a cultural myth about who will and who will not be recognized as human.

Strikingly, many of the people being denied this recognition are children themselves. And childhood itself functions to support that denial. Arguments about school bathroom access often imagine children in the abstract, as blank slates without thoughts, identities, or agency. Imagining children as “innocent” positions them as needing adult protection. But keeping transgender students out of school bathrooms does not “protect” children. These arguments must exclude transgender children from the category “child” in order to make the claim that trans kids are the threat rather than the ones under threat from teachers, school administrators, and peers. Some even go so far as to say that trans kids need to be protected from themselves—from the very information and support that would allow them to be themselves. But the existence of transgender children demands that adults grapple with the reality of children’s agency, their ability to know and name themselves. Children are not a homogenous, normatively gendered, soon-to-be-heterosexual group, but rather individual people as complex and diverse as those of us who are adults. 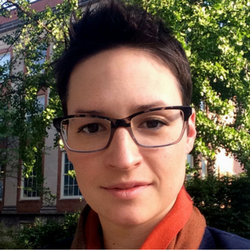 - Gabrielle Owen, Contibutor to The Palgrave Handbook of Sexuality Education