In this article Stan Stojkovic, author of Prisoner Reentry, discusses the challenges that will need to be addressed upon Chelsea Manning’s reentry to society after her sentence was commuted by President Barack Obama.

In May 2017, Chelsea Manning will become a free person due to the commutation of her sentence by outgoing President Barack Obama. Ms. Manning had been sentenced to 35 years in prison after being convicted in a military court of releasing hundreds of thousands of classified documents to WikiLeaks. Her release will bring supporters of her cause some excitement but also will bring the voices of her critics who claim she harmed the United States in its war efforts in Afghanistan and Iraq. Regardless of point of view, Ms. Manning’s release also raises questions concerning her safety and the type of issues she will face as a former prisoner.

Similar to other released prisoners, Ms. Manning will have to address issues such as housing, security, and post release adjustment. She, however, will have to deal with a significant issue that most other formerly released prisoners do not have to deal with—her trans status and how that may impede her readjustment to society. Being a trans person in society is difficult enough, but being a trans person who is released from prison and has the notoriety of Ms. Manning poses other challenges that most typical prisoners do not have to face. Most notable is the issue of scrutiny and possible attack from those who hate her because of her act of presumed treason, but in addition, the change in her gender during this entire ordeal.

She may, at one level, be hit twice as hard by a release protocol that not only is unable and ill-prepared to deal with gender reassignment issues, but now has to address also that she may be the most hated released prisoner in recent memory. Ms. Manning has already attempted suicide while incarcerated, and the stresses of release may make her even more prone to erratic and problematic behavior while in the community. She will definitely be a challenge to any supervising authority in the community. Yet, there are other issues that would have to be addressed in her particular case that deserve the attention of the releasing authority.

Given that Ms. Manning will be a high profile release, questions remain regarding her release status and the type of supervision, if any, she will face. Since her sentence was reduced due to a Presidential commutation, it is quite possible she will be released with few or no restrictions on movement and associations with others. This information still has to be determined, and we will learn more about her release conditions as the release draws near. Regardless of release status, there may be other post release adjustment issues that she will face similar to typically released offenders: housing, familial support, employment, substance abuse issues, mentally health treatment concerns, and re-integration back into the community.

Again, given Ms. Manning’s unique circumstances, all of these issues will need to be addressed in specific ways such that successful reintegration is possible, and this will be no small feat in her case. Due again to the notoriety of this case, the most important post release supervision issue will probably center on sustaining a mental health treatment regimen and maintaining her physical security. Similar to other notable prisoner releases, e.g., movie stars and notorious criminals, Ms. Manning faces a host of challenges that could make the supervision process even more difficult.

Depending on the nature of the release mechanism, we may see unique challenges regarding housing and familial support. Her gender status, in addition, may be problematic. As unique cases, the needs of trans persons are not often considered by governmental agencies or even social service organizations. We know the problems that trans people already experience; Imagine those problems for a person like Ms. Manning who is different on two dimensions: being a trans person and a scorned and hated person due to the nature of her crime.

In the end, regardless of individual circumstance, society has to provide a safe and secure transition of its prisoners back to society upon completion of their sentences. In this regard, Ms. Manning is no different than any other prisoner being released from prison—housing will be critical, familial support will be essential, unique services required, and employment to cover the ordinary costs of living in society. The problem has been that society’s response to the formerly incarcerated has been abysmal, yet improving in recent years. Ms. Manning will face the difficulties of adjusting to life on the outside, but her atypical and unusual circumstances will require vigilance on her part and those people and agencies that have an obligation to make sure successful transition from prison to society is possible. In her case this will be a formidable challenge.

Stan Stojkovic is Dean and Professor of Criminal Justice in the Helen Bader School of Social Welfare at the University of Wisconsin-Milwaukee, USA. He has been studying correctional practices for over 30 years and has worked with numerous police and correctional agencies across the country as well as with the United Nations addressing the topic of effective prison leadership. 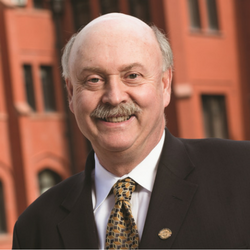 In this podcast, produced by Springer Nature Storytellers and the Before the Abstract, Stan Stojkovic tells a story about redemption, starting with the day he received a letter from a convicted murderer. You can listen to the podcast, here.

As the need to communicate research beyond the confines of scholarly circles grows, Springer Nature is offering authors and potential authors the opportunity to talk about their real-life experiences as researchers, in their own words. We feature these personal stories through a mix of podcasts recorded at live events and written submissions. 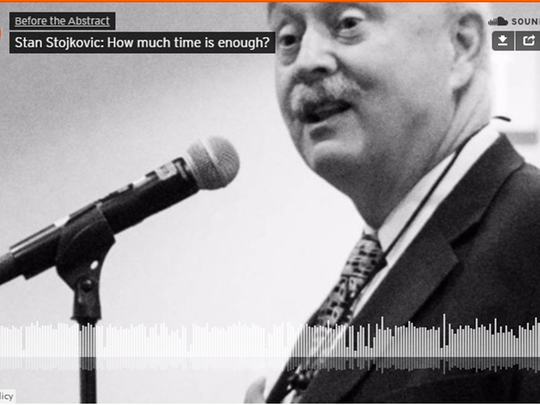