You might take a walk through any city and not notice the traces of water’s vibrant part in making city cultures and materialities. But if you were mindful of water and the spaces, objects and artefacts that it has made at different moments in histories, and still makes, you would see traces of water everywhere. Indeed water is so much part of our everyday lives, and even our bodies-  the brain, lungs and kidneys contain 85% water,  that it is only when it is scarce or in too much abundance in areas of flooding, that we pay it much attention. We not only depend on water, without water we would die. Water lies at the very heart of the interconnectedness and entanglements of humans with our environment and reveals, arguably more than any other substance, the impossibility of thinking of ourselves as separate from nature. Water is far from being a naturally occurring terrestrial resource but is shaped in multiple ways by human activities and cultural practices. Water exists as a resource through a complex intersection of socio- technical networks and systems and is a site of different cultural meanings and social practices across time and space. Water is both a source and a force. Water imposes a set of technologies for containing it and directing it; it is enmeshed in a myriad of governmental and regulatory practices as well as private markets and complex forms of provision. Its abundance as well as its scarcity is constituted in public discourses and political decisions, implicated in relations of power as these are, as much a ‘natural’ occurring phenomena as rains, floods, and drought. Water enables and assembles a multiplicity of publics, embodied practices, cultural practices, and diverse forms of sociality. Water is far from being just the natural resource it is often assumed to be.

Water stretches and flows across human- non-human networks. Nowhere are the effects of human activities on the Earth’s eco-systems, in the current moment denoted by many as the Anthropocene, more visible. Not only does water cross the boundaries of different substances, with complex intersections and effects, the very complexities of current and impending water crises across the world, lead to greater uncertainties as to what kinds of solutions are possible. Indeed, many see water as the most pressing concern of the twenty-first century, which is likely to lead to massive migrations and water wars. At the same time, there is less and less certainty as to how best to resolve the scarcity of water, or its overabundance in the form of floods or rising sea levels in many parts of the world. Water is never far away from the centre of life and thought.

Water is theorized in many different registers and through many different frames:  crisis, infrastructure, symbol, culture, politics, management and delivery, consumption, the economic and the social. Each of these spheres are interconnected and related and not easily disentangled. Water is emblematic of the powerful interconnections between human/ non-human, and nature and culture, where these entanglements are in a constant process of transforming cityscapes and landscapes, which in turn produce new waterscapes and manifestations of the ‘natural world’.  Water has the capacity to make things happen, to bring new socialities and publics into being. Water is an intrinsic part of everyday life, often invisible in its workings and taken for granted, only entering public discourse and visibility when it becomes a matter of concern through, for example, its scarcity, or its potential for danger or for the accumulation of profit. Water is deeply political, implicated in relations of power and constitutive of social, cultural and spatial differences. Water is highly contested both as a resource and a site of complex meanings.

Though the impending crisis of water scarcity is likely to be the greatest challenge of the 21st century, this is not my central argument, instead I argue for the importance of water as a cultural object, and as a source of complex meanings in everyday life, whether it be Mumbai or London, Hanoi or Paris. Humans need water to thrive, and many daily practices and habits that often go unnoticed are connected to the presence of water. Water is needed for bodies to keep clean, for embodied pleasures, for ritual practices, for the beautification of urban sites and so on, and each of these are enabled by the socio-technical systems and structures of a specific historical and material context. My interest is in bringing cultural practices to the fore, arguing also for their embeddedness in a wider social, political, economic and technological context, and exploring water’s importance as a cultural object, and as a source of complex meanings and practices in everyday life, embedded in the socio-economics of local water provision.  What I am interested in therefore, are human-organized systems, meanings and practices, in a way that does not neglect the materiality of water and water-ecological-relations, but which does not take these as its primary focus. Water, precisely because of its fluidity, in some sense resists definition, in that, however much human infrastructures and representations strive to contain and channel water- it continually 'leaks' out of this containment. Because it is a highly fluid substance that is difficult to contain, physically, and because it is so essential to all life, particular cultural representations can never quite monopolize it.  Water is thus difficult to encapsulate, connected in different ways and spaces to unwanted fluidities - of migrants in the case of crisis, of gender or sex, of bodies and identities.

Water makes and unmakes cities across the ages, it settles or is unsettled in serendipitous and fluid ways, enabling and disabling daily life as it ebbs and flows into domestic and public spaces.  Yet water is often ignored, invisible or forgotten as vibrant matter in the city, existing in the world as material object, cultural representation, as movement, as actor, as practice and as ritual.Water has the capacity to assemble publics. During the nineteenth century some 40,000 men earned a living on or about the Thames  lightermen to carry passengers, dockers to unload the ships, watermen to carry the goods ashore, mudlarkers sifting the banks to find treasures, sewer hunters delving in the drainage for old coins, bargemen to carry large loads along the river, whisky men to quench the worker’s thirst. These were just some of the men drawn to the power of the river to make work and to bring people to its waters. This is a story that repeats itself in urban rivers everywhere.

Not only does water assemble working people, through its capacity to provide embodied pleasures, as a site of immersion, relaxation and exercise, water everywhere engages people in aquatic pursuits, enabling healthy and happy bodies, soothing troubled souls and connecting individuals across their differences as they share spaces in often unexpected and unplanned encounters, in lidos, ponds and baths in cities. In a similar vein public water features in the city bring together urban designers, water engineers, and multiple publics to gaze and more recently to actively engage. Publics then are heterogeneous. This is very clear when considering how water is imbued with religious meanings and symbols and core to a plethora of religious practices and rituals, which often go unnoticed until they are contested. Finally understanding the practices and habits associated with consumption  which are differentiated by age, gender and ethnicity, is crucial in strategies to reduce household use of water.

The specificity of water sites and water practices, then, are core to my concerns underpinned as each are by several key themes. First is the interconnectedness of humans and non-humans, of nature and culture, and the complex entanglements of water in all its many forms. The second argument is that water constitutes multiple differences which are themselves not fixed, but which shift and change across time and place. Third, that water is implicated in relations of power, often invisible, but present nevertheless in the workings of daily life in all its rhythms and forms. Thus also, differences are themselves connected to power, and water sites and resources mark boundaries and borders, and are political and contested. And finally, water has the capacity to assemble a multiplicity of publics and constitute new socialities and connections in different ways in different cities across different socio- political and socio-technical environments. As the history of Angkor Wat attests so vividly, cities, and their inhabitants, will die without water die, and so will their cultures.

Sophie Watson is Professor of Sociology at the Open University. She has written extensively on cities, feminist theory, public space, street markets and multicultural differences and politics. 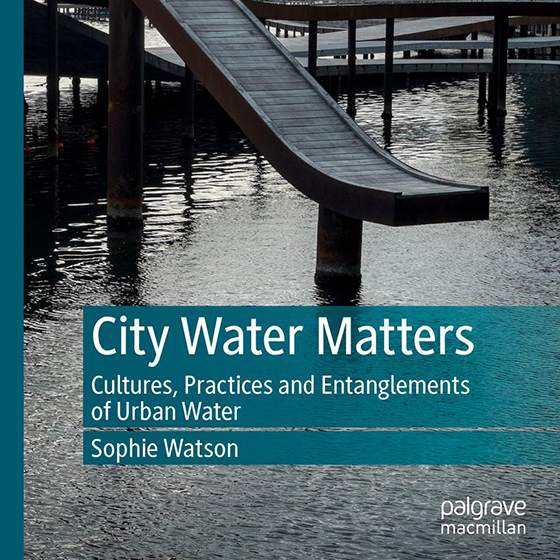